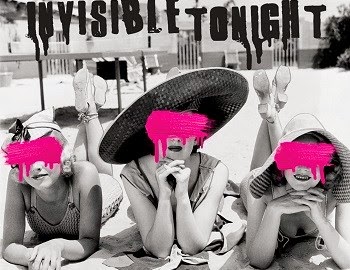 The Nearly Deads are ready to take the world by storm with their debut full length titled Invisible Tonight which releases tomorrow, June 24th 2014. Although this female fronted band resides in Nashville, TN the band's roots hail from Tampa, Florida with a name inspired by an old Florida saying "home of the newly-weds and the nearly deads" as Florida has long been hailed as a retirement destination for America's elderly.

Despite releasing just their first full length, the band has been around since 2010 with the release of two EPs in 2011 and 2013. A busy band who has performed over 500 shows in the past 3 years alone!

The band's sound has been compared to "Kelly Clarkson fronting the Foo Fighters." Fans of Paramore and Tonight Alive will also really enjoy The Nearly Deads.

The album starts of with a piano harmony that quickly explodes into a powerful declaration of "...we're over! We're over!" A song about leaving behind an un-fulfilling relationship in which the status quo is unacceptable and leaves the listener ready to begin a new story. "I'm in the mood to go break some hearts," as TJ sings in the album's debut single "I Said."

Adventure continues through the album's 11 tracks with a number of twists and turns including a few Fight Club references in the song "Changeover." ("and the audience has no idea...") The album features a solid mix of energetic sing-a-long, almost anthemic (is that a word?) songs about relationships, heartache and standing strong on your own. As TJ sings in the album's final slow-dance titled "Never Look Back (Reanimated)," "who are you judging anyway? It's my neck on the line."

Invisible Tonight clocks in at about 35 minutes which feels like an appropriate length. Long enough to feel like a complete musical journey but short enough to leave the listener wanting more.

Our Score:
9/10 - An enjoyable listen from start to finish with catchy choruses that will stick in your head for days after listening!

Check out their Wayne's World inspired video for "I Said" as well as some tour dates here: link

Also check out No Problem! Marketing who have done some great work with the band!