Album Reviews: Moving On by Versus You 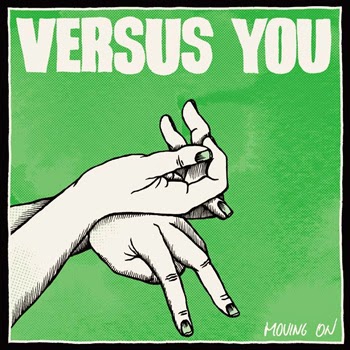 Versus You are a four piece pop-punk band from The Grand Duchy of Luxembourg. With a uniquely 90s inspired sound in the realm of Jimmy Eat World, No Use For A Name and Kerplunk era Green Day. Fans of the west coast skate and pop-punk sound will enjoy Versus You.

Their latest album Moving On was released in February 14, 2014. "No one's going home tonight/We'll be alright here side by side" starts singer Eric Rosenfeld on the album's opening track "When It All Goes Down" which appropriately hooks the listener while setting the tone for the rest of the album, upbeat positive energy.

"Be Better Than Me" is a strong single which made No 1. on iTunes Rock Charts in Luxembourg. Swedish singer Hannah Smallbone lends her voice to the song, providing an excellent harmony which fits very well within the context of this lamenting break-up song and highlights the mutual feelings felt on both sides of the relationship.

The music maintains a fairly straightforward sense of positive energy with a handful of slower tempos. The lyrical content proves appropriate for a Valentine's Day release without getting too sappy or cheesy. A mix of love or anti-love songs with a few reflective songs about acceptance and growing old(er). As Eric says in "Stay Down Stay Strong" ("I'm a drunkard that never learned to be old. / I'm still a kid / Am I to blame, for everything that you did?")

Ultimately, this album is a solid listen for fans of pop-punk music in general. Fans of 90s era, MxPx, Green Day, Descendents, No Use For A Name etc... in particular will really enjoy this album as well as everything else in the band's back catalog!

Interested in winning a FREE copy of a Versus You CD, LP or 7 inch?
Check out our contest here: link